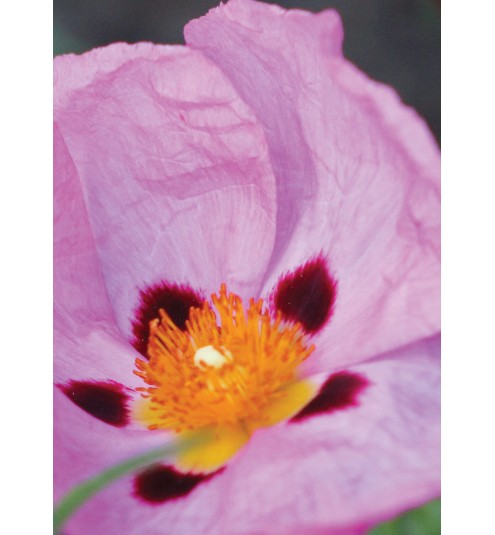 The slender leaves of the perennial shrub of Cistus are covered with secretory trichomes that exude a fragrant gum resin. During the months of April to June, the short-lived flowers begin to bloom for only a single day. The young leafy twigs are then hand-harvested, which after harvesting they are left to regrow and regenerate for the following year. The collected fresh young branches with leaves are then steam distilled to produce the essential oil.

An ancient source of incense, as ancient as Frankincense and Myrrh, with an distinctive, penetrating aroma. Originally the gum resin was used, known as Labdanum. Cistus oil is best known amongst French practitioners as a useful neurotonic essence, with expectorant and healing properties.

Beneficial for easing respiratory infections, reduces inflammation, and aids in coughs and similar infections. It helps to lift emotions and calms the nerves. Useful in generative skincare preparations especially for mature skin, wounds and wrinkles. It has been suggested, that when combined with Frankincense, it is excellent for meditation.

FACT : Considered a biblical oil. During humble times, a utensil, that was a kind of rake, a "labdanum-gatherer" to which a double row of leathern thongs were fixed instead of teeth. These were used to sweep the shrubs and collect the resin which was later extracted. It was collected by the shepherds and sold to coastal traders.