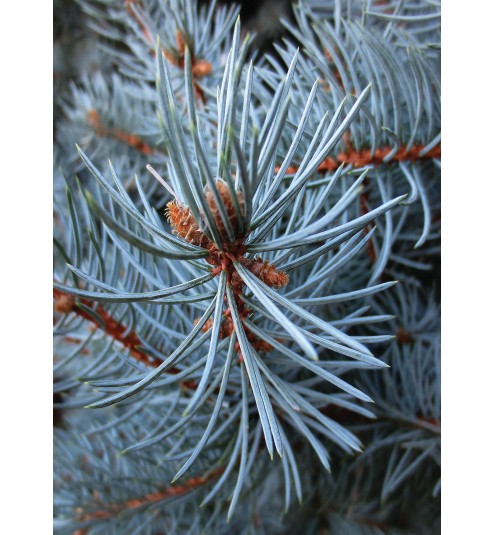 It is considered the second largest tree in Europe after the Norway Spruce (Picea abies), and there have been many examples recorded in European countries where mature specimens have grown to a mammoth height of 55 metres. Measuring about 2 metres in diameter, the straight trunk is smooth and grey with horizontal branches that curve upward at their tips. The flat, needle-like leaves are dark green above with two white lines beneath, and when seen from below the tree appears to have a silvery colour – hence its common name.

A well regarded oil throughout Europe, Fir Needle is valued for its medicinal properties and fragrant scent. Used mainly for respiratory complaints and muscular pain. The needles are steam distilled to produce the oil.

Silver fir was the first species used for the Christmas tree, but has since been replaced by Douglas and Noble firs. Like many species of fir and pine, it has been suggested, that the entire tree is highly medicinal with beneficial for health giving remedies, this would include the buds, bark, leaves and the resin. The silver fir tree has a soft wood that is easily worked, and in many countries where it grows it is employed in carpentry.

Fir Needle is calming, can help with congestion and can help reduce respiratory inflammation. There is an ability to stimulate the senses and uplift the spirit. May help to ease coughs, congestions, nasal allergies and encourage clear breathing. Because of its warming effect, Fir Needle essential oil is often used in a massage blend to help relieve and soothe joint conditions, muscular aches and pains associated with rheumatic or arthritic conditions, including gout.  Used in perfumery for pine-like impressions and for masculine type fragrances.

FACT : Since folklore medicine, and throughout the European continent for centuries thereafter, a simple and common practice to make a poultice with fragrant Fir needles for relieving regular conditions such as fevers, arthritis, rheumatism, muscular pain and respiratory problems. The resins/gums of fir trees were used to prepare ointments to treat itches, sores, wounds, insect bites, boils and infections. The extraction from the bark was used for curing kidney problems and the roots were used in the treatment of heart diseases and rheumatism.