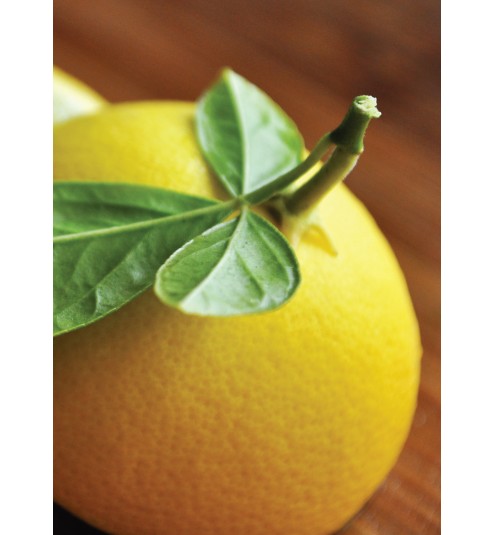 A cultivated tree, on average is about 6 meters in height, a bushy tree with shiny green, dense leaves and short thorns on the branches, with large white fragrant flowers mature to large pale lemon-yellow fruit, with light pale coloured flesh.  A possible cross between 2 other citrus fruits of sweet orange and a pummelo (a fruit originally from Java, initially western society had known it as a 'Shaddock/Shattuck'). By the mid 19th Century, the name as we know it (Grapefruit) had evolved to suggest that the clusters of the fruit on the tree, resembled and which appeared often similar to grapes.

Production is mainly centred around the area of California and Florida of the USA, Israel, Brazil and Argentina of S.America as the tree requires a consistent hot climate. Obviously, the fruits and ultimately the oil, differ various constituents between true areas and climatic changes. The fruit peel is cold pressed to distil the Grapefruit essential oil.

Grapefruit, along with other citrus based oils, possesses similar qualities. Suggestions that Grapefruit oil is a recognised and popular choice as a detoxification agent: to clear toxins and remove excess fluids. It is often used to ease muscle fatigue and stiffness. May benefit in caring for the skin, helping with congested, oily and acne prone skin, promoting hair growth, and tones the skin and tissues. Uplifting and refreshing, it may enhance the nervous system from depression, headaches, nervous exhaustion and stress related conditions. Also, fruits that are high in Vitamin C, like oranges and lemons (and then Grapefruit), have been thought and considered to boost the immune system against chills, colds and flu related complaints.

FACT :  Interestingly, there are circulated reports of speculation in regards to the original name, that during the 17th Century:- an East India Company trade merchant who had brought citrus seeds to the West Indies to grow and develop, was a Captain Phillip Shaddock. Also, about the same time, was an early settler of the West Indies, who became a local sheriff, turned governor on Barbados, was a Captain Thomas Chaddocke. By the mid 19th Century, seeds were sown in Florida, USA. Further cultivation and crossings have suggested that the Tangelo, the 'Red' and 'Pink' Grapefruit had been cultivated and emerged by the early 20th Century.