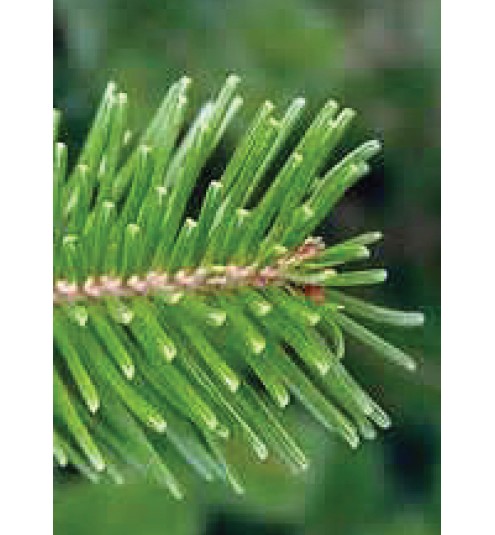 The Siberian Fir Needle is a coniferous evergreen tree growing to 30 meters, producing needles that are highly aromatic. The shape of needles as opposed to leaves, are natures survival instinct - the needles allows less water evaporation as it would from a leaf that has more surface area. A hardy tree that is tolerant of the little sunshine, frosts and snows, surviving temperatures down to −50 °C, which can then live up to 150 - 200 years. The oil is extracted from the needles and small twigs collected and are then steam distilled.

Native to eastern Russia, Turkey, Mongolia and northern China, forming large forests in north and east Russia and Siberia. Visually, it encompasses the perfect Christmas tree. It was introduced to Europe in the 17th century and used for house and shipbuilding. Oil was produced in small villages throughout Russia before the revolution. This oil is a favourite to use around the Christmas holidays.

Fir Needle is calming, can help with congestion and can help reduce respiratory inflammation. There is an ability to stimulate the senses and uplift the spirit. May help to ease coughs, congestions, nasal allergies and encourage clear breathing. Because of its warming effect, Fir Needle essential oil is often used in a massage blend to help relieve and soothe joint conditions, muscular aches and pains associated with rheumatic or arthritic conditions, including gout.  Used in perfumery for pine-like impressions and for masculine type fragrances.

FACTS :  Ancient Egyptians used Fir needle oil to prepare hair growth formula that would elevate and energize the root of the hair when massaged onto the scalp. Generally, all parts of the tree have been used through history, among all continents of world.