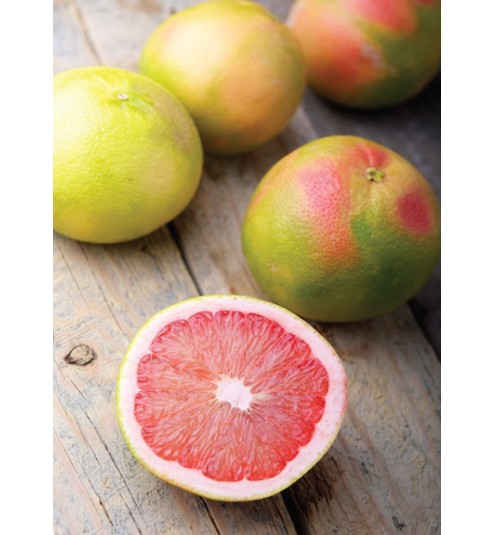 A cultivated tree, on average is about 6 meters in height, a bushy tree with shiny green, dense leaves and short thorns on the branches, with large white fragrant flowers that mature to large lemonish-yellow (tinged with hues of pink/red) fruit. From cultivation and crossings of the original variety of pale yellow skinned and lighter (white-yellow) fleshed Grapefruit fruit, that by 1929,  a “Ruby Red” fruit (of the Redblush variety) received the first ever grapefruit patent in the US. Pink Grapefruit are a hybrid of a red grapefruit and white grapefruit. Not so bitter, and obviously sweeter than it's former cousin, using cold pressed fruit peelings to distil the Pink Grapefruit essential oil.

Pink Grapefruit, along with other citrus based oils, possesses similar qualities. Suggestions that Grapefruit oil is a recognised and popular choice as a detoxification agent: to clear toxins and remove excess fluids. It is often used to ease muscle fatigue and stiffness. May benefit in caring for the skin, helping with congested, oily and acne prone skin, promoting hair growth, and tones the skin and tissues. Uplifting and refreshing, it may enhance the nervous system from depression, headaches, nervous exhaustion and stress related conditions. Also, fruits that are high in Vitamin C, like oranges and lemons (and then Grapefruit), have been thought and considered to boost the immune system against chills, colds and flu related complaints.

Document evidence proves, that as the original pale-yellow bitter fruit popularised with close trade amongst the neighbouring islands and mainlands, the tree was known as "Forbidden Fruit" by the mid 18th Century, and is still considered as one of the "Seven Wonders of Barbados". By the mid 19th Century, the name as we know it (Grapefruit) had evolved to suggest that the clusters of the fruit on the tree, resembled and which appeared often similar to grapes.