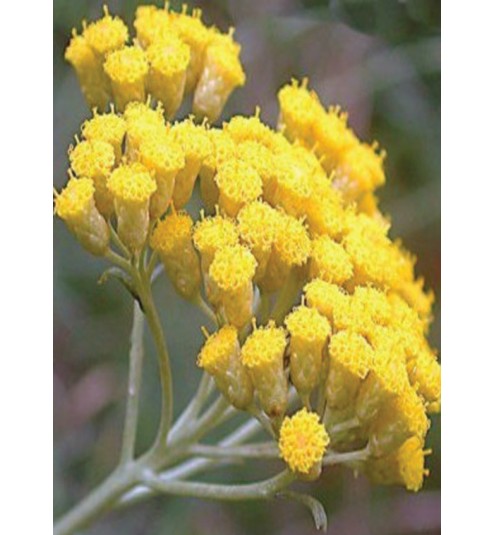 The Helichrysum genus comprises of over 600 species of plants, with only but a few that can produce essential oil. Also known as Immortelle, Helichrysum, St. John's herb  (not to be confused with St. John's Wort which is known as Hypericum perforatum), Strawflower or the Everlasting Daisy because of its ability to remain the colour of the flower as it was, after it has been cut and dried. Native to the Mediterranean region, including France, Italy, Spain and the Adriatic coast.

A highly aromatic herb-like plant that grows to around 60cm and spreading across to about a metre. Consisting of a woody branched stemmed base, with silvery-green scented leaves, and an abundance of clustered small yellow flower heads. Due to its dry nature, these papery flowers produces a limited quantity of oil. This very costly and hard to come by oil is obtained by steam distillation of flowers desirably harvested within a 24 hour period beforehand. Though, distillation of the dried flowers is usually carried out, with younger plants yield greater quantities (the yield of oil may vary from 0.05 - 0.2%).

A combination of unusual compounds which contribute to its anti-inflammatory and anti-allergenic properties, due to its historical treatments with increasing the ciculation of sprains, muscles and joints. Aids the digestive system and helps relieve most respiratory complaints. Boosting the immune against infections, fever, cold and flu  related illnesses. Eases headaches, migraines, with the aroma (is said to) induce feelings of comfort and security to help with depression, lethargy, nerves, exhaustion, neuralgia and stress related conditions. Beneficial treatments, based on historical use to helping with wounds and scar rejuvenation, with healing actions to promote regrowth of skin, aiding wounds, cuts, burns, and easing inflammations, allergies, skin irritations and breakouts, of acne, boil, eczema and psoriasis.

FACT :  The name is derived form the Greek words of 'Helios' meaning Sun and 'Chrysos' meaning Gold. Used extensively in Ancient Greece, as a culinary plant and herbal medicine remedies for healing scars and other significant skin complaints, due to aging.