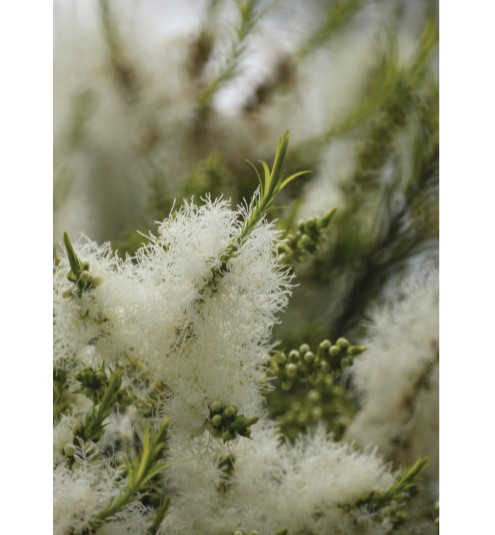 A fast growing small shrub, with needle thin leaves, is a native medium sized tree to the North East region of New South Wales, coinciding with the border of Queensland. There are over 300 varieties of Melaleuca, however, only one, the Melaleuca alternifolia, contains great amounts of antiseptic and fungicidal qualities. Whilst any species of melaleuca that conforms to the standard of ‘Oil of Melaleuca; Terpinen-4-ol type’ (this considered the primary active ingredient of Tea Tree) can be traded as Australian tea tree oil, only this one species, Melaleuca alternifolia, represents 99% of world trade of the official Australian Tea Tree Oil.

Traditionally, the trees were cut by manual labor using cane knifes, and the crop was immediately bagged for transport, as the leaves had a tendency to fall off when drying out. To avoid loss and optimise quality control, after the leaves are pruned, they are collected into a "Bush Still", a steam distiller unit mainly on site, within the direct vicinity of the trees and plants in their natural habitat. This form of on-site distilling allows variable constituent qualities, allowing various level of qualities - yet achieving acceptance level. The consistency of oil varies from tree to tree. The harvested leaf is placed in racks inside the steamer. Heat is distributed through the still by burning wood, once the water boils, steam is created and passes through the capillaries of the leaves. The capillaries that contain the essential oils burst through this process, which after releasing the essential oil it passes to a collection tank. Here, the oil floats to the top where it is filtered and poured into containers to be shipped to the marketplace.

FACT : During the 20th Century, Tea Tree became a household remedy in many Australian homes and had served as an essential potion of a World War II soldiers kit. World recognition fro health claims in the past 70 years has propelled Tea Tree as a leading and natural alternative for its antiseptic properties. The Australian tea tree oil production expanded and boomed over the 1980/90's to being Australia’s largest essential oil export earner (in dollar terms).