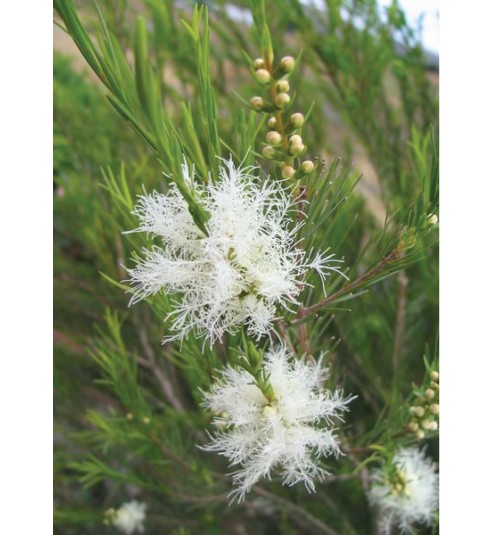 A fast growing small shrub, with needle thin leaves, is a native medium sized tree to the North East region of New South Wales, coinciding with the border of Queensland. There are over 300 varieties of Melaleuca, however, only one, the Melaleuca alternifolia, contains great amounts of antiseptic and fungicidal qualities. Whilst any species of melaleuca that conforms to the standard of ‘Oil of Melaleuca; Terpinen-4-ol type’ (this considered the primary active ingredient of Tea Tree) can be traded as Australian tea tree oil, only this one species, Melaleuca alternifolia, represents 99% of world trade of the official Australian Tea Tree Oil.

Tea Tree's of very similar quality and form are cultivated and harvested to create Premium Tea Tree Oil, as this universal consistency increases a higher 1,8-cineole and Terpinen-4-OL content. After 12 months from planting, they are ready for harvesting at soil level, this produces a shredded stem afterwards that encourages rapid regeneration. With many of the larger plantations, this modern method of distillation, have adopted this form of mechanism of all field operations (planting and harvesting), as it is cost and time effective . The tank vessels collect and receive the harvested crop, when transported to the distillery, their tanks are sealed shut. A separate boiler produces steam, which is then injected into the sealed tanks. This entire method, from steam to pass through the leaves, producing the oil, collecting, condensing and separating the oil may take only 2 - 3 hours. Leaf mulch can returned back to the field with the remnants of leaf after distillation, or can be re-used as fuel for the boiler furnace for another distillation.

FACT : Tea Tree has a long historical and traditional use in Aboriginal culture. From tea beverage flavouring to being a natural antiseptic. During the 20th Century, Tea Tree became a household remedy in many Australian homes and had served as an essential potion of a World War II soldiers kit.