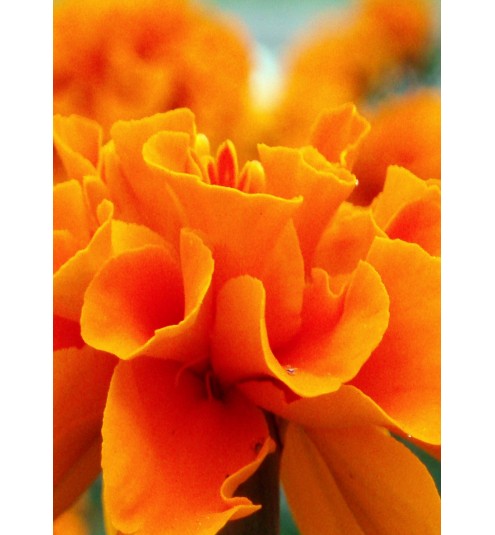 As a member of the Sunflower family, it is commonly grown and harvested for its essential oil - Tagetes thrives in full sun, in disturbed areas of the temperate grasslands of South America. Easily grown from seed, it was grows very well in the other regions listed. Not to be confused with Calendula.  T. minuta is an erect, woody annual herb, usually 0.5-2 m tall with strongly odorous foliage. Fast growing, and in some countries considered a weed - which it competes with crops and interferes with their management or harvest.

The familiar name of Marigold has its origins back to Marys Gold. This is offered to Mother Mary on 25th March every year and is considered as a sacred day - when the Angel Gabriel informed Mother Mary about the arrival of Jesus Christ. In some traditions - the seeds would be sown in pots and displayed as a representation of blessedness and endurance to invite the heavenly power.

Popular in India in the production of perfume. Tagetes has a long history of medicinal preparations from  beverages to condiments, as well as a culinary herb and seasoning. In Chinese medicine it helped in the treatment of cold, coughs, sore eyes, colic and mumps.

Though it has a pleasant odour - it is widely used for it's anti-septic and anti-parasitic qualities, therefore popular in pharmaceutical products. For positive effect on skin infections and small weeping wounds. Assists in easing cold and flu.

FACT : It is said that when Australian troops served their time during the Boer War (in South Africa), they'd returned with Tagetes plants - as it was an important ingredient in numerous foot medications. It has been suggested that fresh, tied and left by the entrance to the home, aided in the repellency of annoying insects