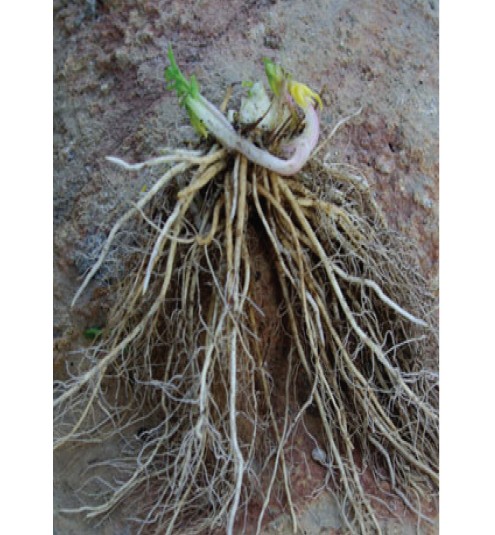 A herbaceous perennial herb of 2 years old from which the rhizone, roots and stolon are steam distilled and collected before flowering. Growing in areas of watery  places amongst the British Isles, across Europe and Asia, it is adaptable in dry, stony conditions to rich heavy loamy, moist areas, therefore covering many geographical locations. Growing to a height of 50 - 150 cm when in bloom, has a dense head of clustered fragrant white, sometimes slightly pink flowers, which blooms in late spring and early summer.

Harvest the root in the autumn of the first or second year. Two references suggested harvesting in the second year, but another reference reported that the roots will deteriorate in quality by the autumn of the second year so harvest accordingly. This is one of the top-selling sedatives in Europe, and is still growing in popularity in the United States and the rest of the world. It also make an attractive and fragrant addition to the home flower or herb garden.

A highly regarded oil since medieval times, it used to be known as "all heal". Often recommended in the West as a sedative and is also used to treat "nervous stomach" for irritable, nervous tension or restlessness in insomnia, migraine, intestinal colic, rheumatism, and a general pain reliever. Considered amongst many, for its 'all-heal' like properties that have since served European cultures for cholera, epilepsy and for skin complaints. In Asia, especially Chinese medicine, is commonly used for backaches, colds, menstrual problems, bruises and sores.

FACT : Valerian tincture was used in WWI and WWII to treat shell shock, nervousness and stress. Valerian root has a very strong odor that attracts cats similar to catnip. According to folklore, in 18th century apothecaries, the quality of valerian root was determined by the way in which cats reacted to it.