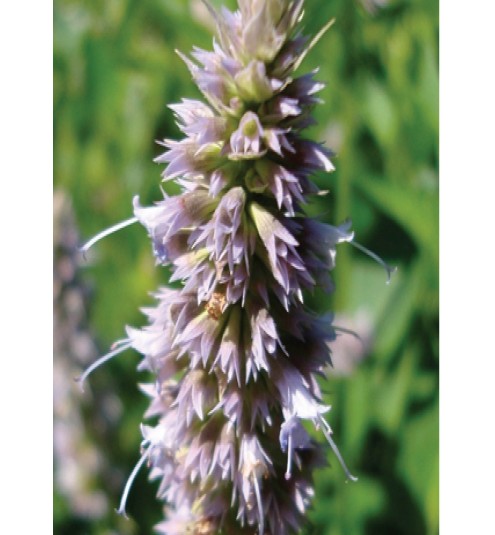 A bushy herb that grows up to 1 metre tall, originally from Malaysia and India, but is now cultivated throughout China, Indonesia, and the Philippines. It is a perennial with large fragrant, furry leaves and white flowers. The leaves were used as a deterrent to moths and insects in clothing, and the oil has been used in many well-known perfumes. "Patchouli Clear" or "Patchouli Light" is produced by a single distillation in modern stainless steel stills with most importantly, stainless steel condensers, so does not pick-up the iron that is used in jungle distillations. This produces a clearer, lighter colour than the traditional oil which is still more free of the reactive iron.

This oil is a little more expensive than the normal Patchouli oil, as the leaves have to be collected, dried, baled and shipped out of the remote area to the factories. An extra advantage is that it gives the processor full control over the quality. It can be guaranteed pure and has a smoother odour due to carefully controlled distillation. Burnt notes can be avoided.

FACT : In the native areas of Malaysia and India, where it is known as 'puchaput'. The word Patchouli is an Indian name which is derived from Hindustan word 'patch' meaning 'green' and 'ilai' meaning 'leaf' - 'Green leaf'. It was placed between Indian cashmere shawls en route to Victorian England, to protect the merchandise from moths, and without this signature smell of dried patchouli leaves the shawls could not be sold in England.