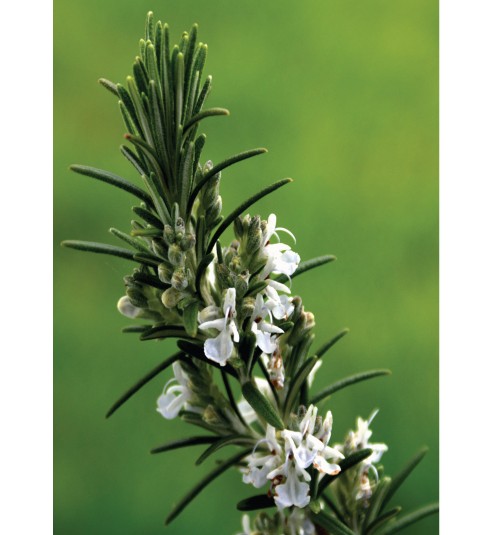 While the various Rosemarys'  are generally interchangable, there are some differences in the genetic chemical make-up that might be due to geographical or environmental differences. Rosemary is derived from the Latin ros (dew) and marinus (sea). "Sea dew" alludes to it's preferred habitat on sea coasts. An undemanding plant, Rosemary grows all around the Mediterranean region and is reasonably hardy in cooler and drought affected areas.

The different geographical locations of Rosemary play a large role in determining the levels of various constituents within Rosemary - the best documented areas are from Spain, Tunisia and France.

Traditionally used as a cooking herb. Rosemary is an uplifting and inspiring herb that helps to stimulate and encourage the being. From a healing perspective the plant has long been used for digestive complaints, lethargy and to lift the spirits. It is also beneficial for headaches and to help clear the mind. Rosemary also helps to promote shine and luster to the hair, many hair tonics and scalp rubs include Rosemary to help promote healthy hair growth.

This chemotype of Rosemary is considered to be most specific for respiratory complaints and ear, nose and throat conditions due to expectorant properties. Also, considered a useful analgesic oil, for the temporary relief of headaches, nervous tension and stress.

FACT : Rosemary has a rich and interesting history from being found in Egyptian tombs dating back to the First Dynasty (about 3000 BC), along with the enchanting Greek legends that perceive, the beautiful Greek goddess Aphrodite was draped with Rosemary as she rose from the sea.