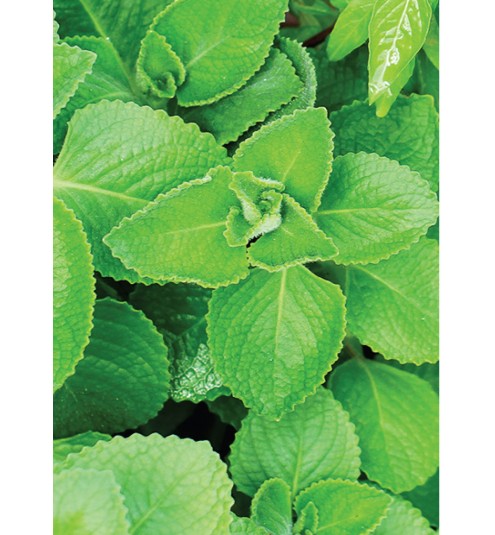 A bushy herb that grows up to 1 metre tall, originally from Malaysia and India, but is now cultivated throughout China, Indonesia, and the Philippines. It is a perennial with large fragrant, furry leaves and white flowers. The leaves were used as a deterrent to moths and insects in clothing, and the oil has been used in many well-known perfumes. Patchouli oil, like a number of other oils such as Clove, is sensitive to iron. In these primitive stills it is very difficult to avoid contact with iron. The result is that the oil from this type of production (which is most of it) has a fairly dark yellow to reddish colour due to the iron. Distillation time is long - typically 8 hours or longer.

Some connoisseurs of Patchouli, appreciate this colour and particularly ask for it. It is indicative of jungle or village production. Other users do not wish to have the oil of this colour (preferring almost clear), or find negative reactions to the iron in some of their blends. For instance, Clove (or the essential oils containing eugenol) will give an intense green colour when mixed with patchouli. Patchouli oil is said to improve with age.

FACT : In the native areas of Malaysia and India, where it is known as 'puchaput'. The word Patchouli is an Indian name which is derived from Hindustan word 'patch' meaning 'green' and 'ilai' meaning 'leaf' - 'Green leaf'. In the East, it is used in potpourris and sachets and place between linen, to keep bedbugs away, and it is the smell of patchouli oil, mixed with that of camphor, that gives Indian ink its characteristic smell.