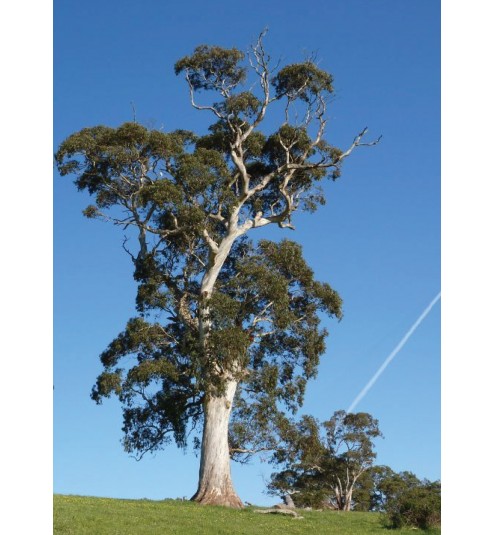 There are over 700 different species of Eucalyptus, with about 500 of which are able to produce an essential oil. Some reports state that only fifteen species occur outside Australia, with just nine of these not occurring in Australia. Though with only a few that produce essential oils - these oils are universally well known for their medicinal or perfumery applications. Of each Eucalypt, the quantity and quality of essential oil produced varies greatly, due to a different chemical fingerprint with variations in the constituents within the oil.

This and most Eucalyptus oil contains cineole which is a common constituent for the medicinal, therapeutic or pharmaceutical application. The harvested leaves and terminal branches are steam distilled to produce the essential oil.

Recognised for its expectorant properties and to assist mild inflammation, the Blue Gum oil has a rich, green crisp leaf odour and good levels of cineole. A proud standing tree of up to 90 metres tall, puts it in some of the tallest trees around, and fast growing too.

Eucalyptus Blue Gum is suitable for aromatherapy and medicinal applications. With a long standing history of use in the skin care of minor burns, blisters, cuts, skin infections and minor wounds, would also aid in the repelling insects. Eases muscle and joint aches and pains, poor circulation, rheumatoid arthritis, and nerve pain. Clearing common respiratory complaints, such as asthma, bronchitis, catarrh, coughs, sinusitis and throat infections. Eases headaches, as well as boosting the immune system against colds, flu, measles, and chicken pox.

FACT :   Adopted by the Early settlers from the indigenous local people, the Blue Gum was the recognised Eucalypt for treatment of cuts, colds and infection, as well as treating feverish conditions and skin problems. The timber of Blue Gum was used for poles and railway sleepers. It has been suggested, that back in the 1860’s a Melbourne Archbishop visited Rome, Italy, had taken along some Blue Gum seeds. Once established, the fast growing trees were grown to help drain away swampy areas, and remarkably reported the serious malaria problems had significantly decreased.