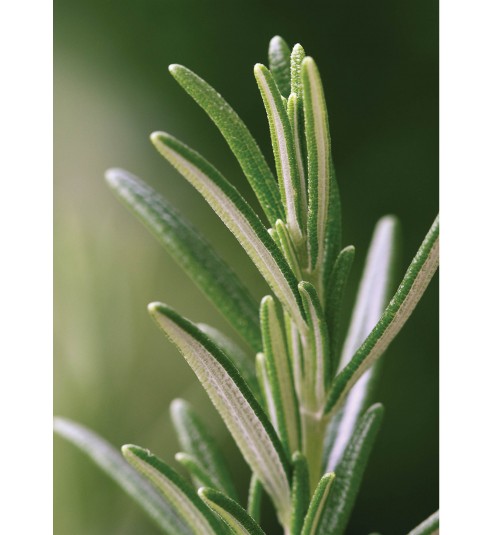 While the various Rosemarys'  are generally interchangable, there are some differences in the genetic chemical make-up that might be due to geographical or environmental differences. Rosemary is derived from the Latin ros (dew) and marinus (sea). "Sea dew" alludes to it's preferred habitat on sea coasts. An undemanding plant, Rosemary grows all around the Mediterranean region and is reasonably hardy in cooler and drought affected areas.

The different geographical locations of Rosemary play a large role in determining the levels of various constituents within Rosemary - the best documented areas are from Spain, Tunisia and France.

Traditionally used as a cooking herb. Rosemary is an uplifting and inspiring herb that helps to stimulate and encourage the being. From a healing perspective the plant has long been used for digestive complaints, lethargy and to lift the spirits. It is also beneficial for headaches and to help clear the mind. Rosemary also helps to promote shine and luster to the hair, many hair tonics and scalp rubs include Rosemary to help promote healthy hair growth.

Rosemary Spain is the most commonly used in Aromatherapy. Best for muscular conditions including aches, pains, cramps and spasm for use with Massage body, compress and the hair and scalp massage. Traditionally a general tonic with warming and energising factors for the memory and concentration. Good for clearing the mind, and useful for skin and scalp conditions such as blemished skin, mature skin and dandruff.

FACT : A renowned and traditional herb to be used for the improvement of the memory, may have intentionally been considered an emblem of fidelity and remembrance in literature and folklore. It is perhaps that this shrub grew wild on the shores of Gallipoli, and was significantly adopted by those who commemorated ANZAC Day and sometimes those on Remembrance Day, by embracing the sprigs of rosemary, to remember and honor the members and events that took place in Gallipoli during Word War I.